Yesterday I posted about the US Presidential Election and suggested that whatever happened the support for Trump constituted a political ‘convulsion’, in a similar way to the Brexit referendum result.

My basic thesis in terms of the New Politics of Inequality is that inequalities that have arisen as a consequence of neo-liberalisation, are increasingly recognised by communities who are becoming anxious and insecure about their socio-economic futures, both for them and their children.  This is creating a sense of disenfranchisement with politics and political institutions, and fuelling anti-establishment politics, extra-parliamentary political movements and new political parties.

These insecurities are located in universal processes of world market integration which increase international competitiveness.  Much is up for grabs here in terms of how economic insecurities are explained via different cultural politics.

On the one hand rightwing-populism appears to exploit economic insecurities as fear of social and cultural change, and in particular to place the blame on immigrants.  Voters with anxieties about economic futures might have already faced the costs of adjusting to globalisation, but they may also be relatively affluent and concerned about the prospects for their children.  This partly explains why the Republican party in the US now seems to be the party of the relatively poor.

On the other hand, leftist populism seems to focus on the insecurities of the relatively skilled workers who find benefits in a more cosmopolitan society and greater diversity.  In part this explains the high skill profile of Brexit remainers and anti-Trump voters in the US.  It is also partly the reason why the Democrats are becoming the party of the rich.

The main ‘convulsions’ seem to result from the success of politicians in manipulating right-wing populism, seeking to ‘take back control’ in the case of Brexit or ‘make our country great again’ in the case of the US.  But these convulsions are somewhat against the tide of history, in several respects.

First, they are against the trend of world market integration.  In terms of UK, constraints on sovereignty are as much, or more, related to its free trade commitments as wider aspects of European integration.  Leaving the EU while maintaining access to the single market is unlikely to claim back much sovereignty, but appears a likely outcome of the Brexit negotiations.  Similarly, voters supporting Trump’s calls to renegotiate free trade deals might also find that this is easier to say and harder to achieve.

What’s more, while free trade has led to increased competitiveness and the loss of jobs in traditional industries, undoing those deals might merely accentuate the problem for those same families and communities who might then be faced with further job losses, rising consumer prices and more economic insecurity.

It is easy for politicians to stoke up these sentiments for a quick political win, but it will prove much harder to actually deliver for those communities.  In both the US and the UK, the really worrying aspect of the Trump victory and Brexit result might be that the ‘cry of anger’ that underpins them will not be met with beneficial change.  Indeed, they may well be worse off still as a result.  Whatever, voters in the US or UK may want, international competition is only likely to increase.

Second, the demographic tide of history is also against these convulsions.  Those watching the TV coverage from the US overnight or early this morning will have been struck by the degree of demographic change in the country.  When Ronald Reagan won the presidency in 1980 88% of voters were white.  This year 70% were white.  Courting white voters may work for now, but there is a ticking clock on that strategy.  Similarly, like support for Scottish independence and remaining in the EU, support for Hilary was much higher among the young, and those not quite yet able to exercise a vote.  Supporters of the ‘take back control’/’make our country great again’ claims to the past are on the wrong side of inevitable change.

None of that should read as comfort.  These convulsions are against the tide of history, but they are characterised by division, aggression and scapegoating of particular communities.  To some extent these convulsions are about communities trying to cling to an imagined past.  When those same groups find that the tide of history is not turned by their pyrrhic victories, the scope for further division and conflict will surely only increase.

Convulsions now, may then breed the conditions for further convulsions in the future.

In that context, and as Sophia Price argues in a companion post to this one, left politicians and parties need to better understand the ways that culture, race, gender and other identities intersect with class.  These intersections shape the ways in which increasing international competition might be understood.

For several decades political parties have sought to respond to the tastes of median voters.  This has often meant that they court, rather than reshape political anxieties – such as in responses to populist – and often ill-informed – understandings of welfare or immigration.  In place of this, left parties seeking progressive responses to competition and insecurity need to meet these challenges head on, offer alternative explanations and unpick the easy sound-bite politics of the right-populists.

That’s no easy task, but the alternative is pretty bleak.

You can find out more about my publications here.

By Dr Sophia Price, Head of Politics and International Relations at Leeds Beckett. 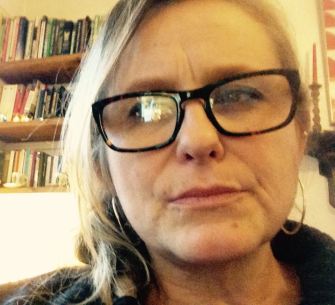 Marx’s adage ‘first as tragedy then as farce’ seems a fitting place to start on this bleak winter post-election morning. In Zizek’s (2009) book of the same name he notes Marx’s correction of Hegel’s idea “that history necessarily repeats itself”. “Hegel remarks somewhere that all great events and characters of world history occur, so to speak, twice. He forgot to add: the first time as tragedy , the second time as farce” (Marx 1973 quoted in Zizek 2009). For Marx, this second comedic version would  mark the “last phase of a world-historical form”.

Scanning social media this morning, there are a wide range of memes and posts that relate our present moment to the rise of fascism in the 1930s. The similarities are evident:  the rise of extreme and violent social movements in the wake of international financial crisis and destabilising and polarising global forces. The tragedy of that moment is now matched by the absurdity of millionaire Donald Trump democratically elected as the antidote to elite power and working class disaffection. Some farce. 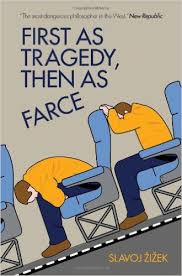 Of course the analysis of the shift to extreme, right wing politics (be it the election of Trump or the vote for Brexit) has to be located within the context of the global spread of neo-liberal capitalism in which free trade and the roll back of social protection and labour rights has intensified the competition between workers. In response the elective power of disaffected labour has proved decisive, and hailed as a protest against the forces of globalisation. However, paradoxically this is a protest vote for increasing the power of capital through the reduction of taxes, social provision and business legislation and a raft of other pro-business reforms.

It is important though that within this analysis we do not lose sight of the intersections of race, gender and class within these processes. Inequitable social relations based on race, gender, disability and sexuality are not the side show to capitalist class conflict, they are the arenas by which it is played out and mediated.  This not only explains the recourse to racialised or gendered ‘others’ in both the US election and UK referendum campaigns, be they refugee ‘swarms’, ‘bad hombres’ or ‘nasty women’, but also the attractiveness of these narratives beyond blue collar workers facing the harsh realities of global competitiveness. Donald Trump was not elected in spite of his racism and sexism, he was elected because of it.

This is not a semantic difference. Those waking this morning wondering what is to be done, need to properly locate race and gender within the analysis of class relations and contemporary capitalism that have provoked these social changes, in order to be able to formulate a viable, progressive and inclusive alternative.

Sophia’s most recent publication is in the Roundtable Commonwealth Journal of International Affairs.